INVESTMENT FROM A TO Z

The Elliott Wave Principle is a form of technical analysis that traders use to analyze financial market cycles and forecast market trends by identifying extremes in investor psychology, highs and lows in prices, and other collective factors. Elliott used the different stock market indicators to discover that the ever-changing path of stock market prices reveals a structural design that in turn reflects a basic harmony found in nature. Based on this research, he developed a rational system of stock price analysis.

1) There are two modes of wave development: motive and corrective.

3) Motive waves constitute the basis for the five wave pattern. Their structures are called "motive" because they powerfully impel the market.

4) Waves 2 and 4 are corrective waves because they move against this bigger trend and form 1 and 3 waves.

5) After completion of 5 waves cycle the wave three begin to form. These corrective waves are denoted by letters a,b,c.

About a half of first waves are part of the "basing" process.  As a rule, wave 1 is the shortest of impulse waves.

Second waves often retrace of wave one but still are held on the first wave.

Third wave is usually the longest and is characterized by dynamic growth. Third waves usually generate the greatest volume and price movement. They produce breakouts, "continuation" gaps, creating large gains in the market. Wave 3 cannot be the shortest of the 5 impulse waves.

Wave 4 has a complex structure and just as the wave 2 is flat in the form of consolidation. The bottom of the fourth wave will never be equal to the peak of the first wave.

Waves 5 are always less dynamic than the third waves. During the formation of this wave technical indicators show declining strength and appear to be negative divergence indicating a weakening trend upward.

Wave A appears once the movement is divided into 5 smaller waves and the trade volume at the market increases in a reverse trend.

During the downtrend this wave reflects a price upward rebound. Wave B is usually a low volume of turnover, may rise to reach and even exceed the previous peak of wave 5.

Wave C is often reduced below the bottom of a wave A. Head and shoulders pattern is formed as a result of drawing a trendline under the bottom of wave 4 and wave A.

A diagonal triangle is a motive pattern yet not an impulse, as it has one or two corrective characteristics. Such patterns are seen on the fifth and the final wave position. As with impulses, no reactionary subwave fully retraces the preceding actionary subwave, and the third subwave is never the shortest. However, diagonal triangles are the only five-wave structures in the main trend direction within which wave 4 almost always overlaps the price territory of wave 1.

An ending diagonal is a special type of wave that occurs primarily in the fifth wave position at times when the preceding move has gone "too far too fast." A very small percentage of ending diagonals appear in the C wave position of A-B-C formations. In double or triple peaks they appear only as the final "C" wave.  Ending triangles are found at the termination points of larger patterns, indicating a further market movement. 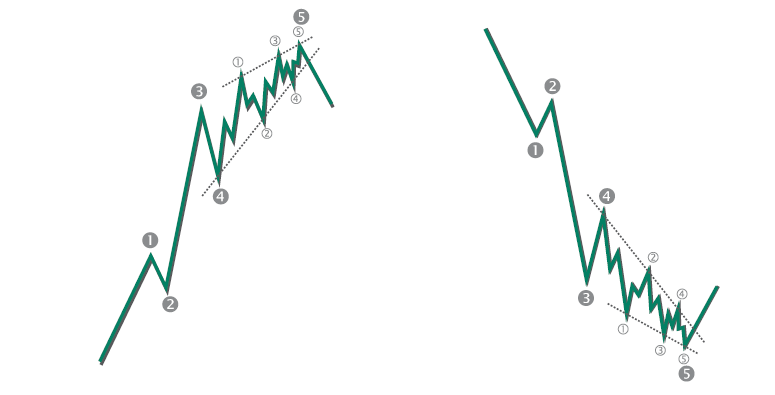 When diagonal triangles occur in the wave 5 or C position, they take the 3-3-3-3-3 shape. It has recently come to light that a variation on this pattern occasionally appears in the wave 1 position of impulses. The characteristic overlapping of waves 1 and 4 remains as in the ending diagonal triangle. However, the subdivisions are different, tracing out a 5-3-5-3-5 pattern. 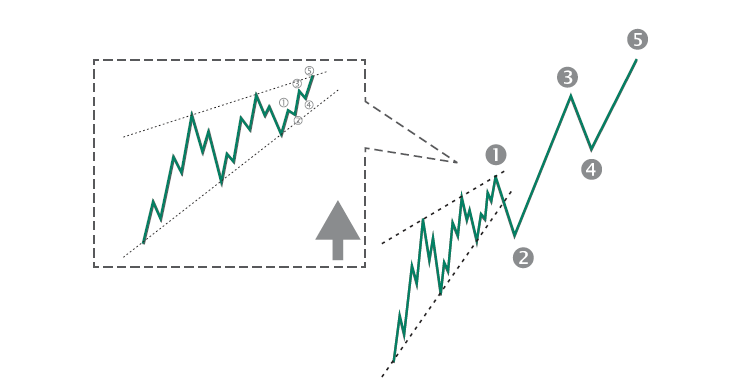 A zigzag is a simple three-wave declining pattern labeled A-B-C. The subwave sequence is 5-3-5, and the top of wave B is noticeably lower than the start of wave A.

As shown in a figure below, a flat correction differs from a zigzag in that the subwave sequence is 3-3-5. Since the first active wave, wave A, lacks sufficient downward force to unfold into a full five waves as it does in a zigzag, the B wave reaction unfolds in 3 waves. Wave B rises to reach the peak of the wave A indicating a strong market trend.

Triangles reflect a balance of forces, causing a sideways movement that is usually associated with decreasing volume and volatility. Triangles contain five overlapping waves that subdivide 3-3-3-3-3 and are labeled a-b-c-d-e. A triangle is outlined by connecting the termination points of waves a and c, and b and d. Wave c can undershoot or overshoot the a-c line.

Sometimes the end of a pattern differs from the price extreme level. In such cases, the end of the pattern is called the "orthodox" top or bottom in order to differentiate it from the actual price maximum or minimum that occurs inside the pattern.

HOW TO BE A TRADER?

We invite you into the investment world of InvestAZ. You can follow the steps below to be an online investor with us.